Oregon Reads: Even the Youngest

Happy Birthday Oregon! Oregon celebrated 150 years of statehood on February 14th, 2009. This year the Oregon Library Association announced Oregon Reads - a community reads project in celebration of the state's sesquicentennial, from January through April of 2009. Oregon Reads is a project taking place in almost every public library and county throughout the state of Oregon. Three books were selected as part of Oregon Reads that portray a story with a uniquely Oregonian perspective and/or experience. Stubborn Twig by Eugene author Lauren Kessler is the adult book choice following the true story of three generations of a Japanese-American family living in Hood River, Portland, and Eugene. Bat 6 by Virginia Euwer Wolff is the book choice for older youth readers. Bat 6 tells the story of 6th grade girls in post-World War Oregon and their annual softball game in which bigotry surfaces. The book for younger readers is Apples to Oregon by Deborah Hopkinson. In Apples to Oregon, a young girl, Delicious, tells the story of her family's journey from Iowa to Oregon to transport the family's fruit orchard.
The Third Grade Book Club at the Corvallis-Benton County Public Library 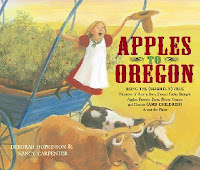 will be reading Apples to Oregon: being the (slightly) true narrative of how a brave pioneer father brought apples, peaches, pears, plums, grapes, and cherries (and children) across the Plains by Deborah Hopkinson in March in celebration of Oregon Reads. But this picture book isn't just for older readers. It also makes a great read-aloud at storytime or a great introduction to original tall tales, the Oregon Trail experience, and local authors for older preschoolers and children in the early elementary grades.