Baby on the Way: New Books for Older Siblings 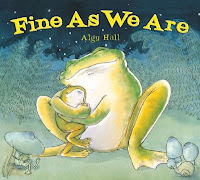 Fine As We Are by Algy Craig Hall (Boxer Books)

Little Frog was living happily with his mom on the pond--just the two of them. Then some strange things began to happen: blobs of black spots appeared in the water, which grew squiggly tails and started swimming. Before too long it's very clear: mom has a multitude of new frog babies. How will Little Frog ever cope? Can he be a good big brother?

Author Algy Craig Hall knows a little bit about how Little Frog might have felt with the arrival of numerous new babies. He is the older brother of quadruplets! 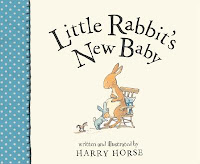 Little Rabbit has looked forward to becoming a big brother, but when Mama brings home triplets, he quickly realizes that babies are not as much fun as he thought they would be.

Of course, there's a very happy ending in store for Little Rabbit and the new babies! Harry Horse's illustrations are quite sweet.
Posted by Kristin No comments:

Pick of the Week: In a Blue Room 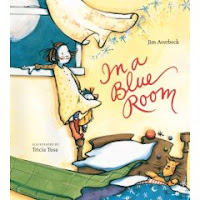 In a Blue Room by Jim Averbeck, illustrated by Tricia Tusa (Harcourt, Inc., 2008)

"In a blue room, Alice bounces, wide-awake past bedtime." This begins the story of a nightgown-clad little girl who just can't fall asleep one night. Mama is set to tuck little Alice into bed, but Alice exclaims that she can only sleep in a blue room. Alice's creative mama brings in a variety of objects to create a soothing room, just right for sleep. In one of the first scenes, when Mama brings in flowers. Alice objects, "And those - aren't - blue," Mama replies, "Ah...but smell."

Young children often have to have things "just right" before you can guarantee their full participation. Parents may recognize their little ones in this story and children will love how the dedication to creating a blue room visually plays out.
Posted by Kristin No comments: 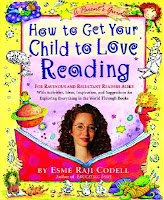 How to Get Your Child to Love Reading: for Ravenous and Reluctant Readers Alike by Esme Raji Codell

This is an invaluable guide for parents hoping to encourage the love of reading in their children. Former teacher, children's librarian, and author, Esme Raji Codell knows her stuff! With book lists, suggestions for integrating books into your everyday life and interests and a general contagious enthusiasm for the love of children's books, Ms. Codell offers parents a positive manual on the subject.

Raising A Reader: a Mother's Tale of Desperation and Delight by Jennie Nash

I just started reading this book about a mother's frustrations and joy in trying to impart the love of reading to her young daughters. With reading being such an important, lifelong skill parents everywhere struggle to know what the best way to approach the subject of reading with their children should be. When you are also trying to encourage a serious love and appreciation for books and reading at the same time, it can add to the excitement and stress!
Posted by Kristin 1 comment: 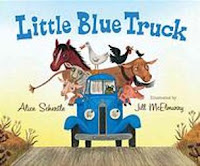 In this story a dump truck and a little blue truck get stuck in the mud. But luckily, with the help of a variety of animals, the trucks find their way out. A fun read-aloud full of great sounds and rhythm, this is also a great tale of friendship and helping others in need.
Posted by Kristin No comments:

Pick of the Week: Little Hoot 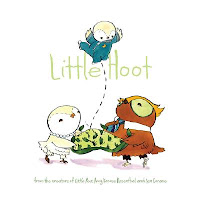 "If you want to grow up to be a wise owl, you must stay up late," said Papa Owl. "And besides, I don't give a hoot what time your friends go to bed. In this family, we go to bed late. Rules of the roost." Amy Krouse Rosenthal (author of Little Pea and The OK Book) takes the familiar theme of bedtime battles but adds a twist. In the life of an owl, the opposite is expected - staying up late! So how does Little Hoot, who just wants to go to bed early like all of his friends, cope with the demands of his parents? Read and find out with this book that is sure to create a few giggles from children everywhere.
Posted by Kristin No comments:

Although it's still summer, if your child is beginning preschool this fall, you might already be talking to him or her about the changes to expect. Anne Rockwell has been producing wonderful stories for preschoolers and elementary-aged children about everything from trucks and trains to holiday celebrations. Her latest book, My Preschool (Henry Holt, 2008), is another great addition to the canon of books helping children adjust to preschool.

In this newly illustrated edition of the 1972 story of Bear's Picture, Bear is in the middle of creating his work of art when two visitors appear on the scene, declaring, "Bear's can't paint pictures!"

This is a tribute to artistic imagination and confidence, as well as a commentary on art criticism. A fun read-aloud for creative young minds! This will also spark some discussion among older children as to what is art? and who decides. Another fun take on this topic for older children is Jon Scieszka and Lane Smith's Seen Art? (Viking, 2005) 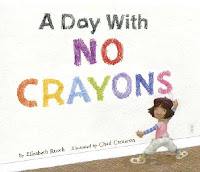 A Day with No Crayons by Elizabeth Rusch, illustrated by Chad Cameron (Rising Moon, 2007) 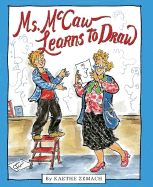 Dudley Ellington isn't very good at paying attention in school. Yet his caring, dedicated teacher, Ms. McCaw has the patience to explain things until he understands them. The students in her classroom think she knows everything, until one day when she attempts to draw.

That's the day that Dudley Ellington becomes the unlikely star and helps his teacher learn! 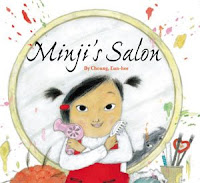 While Minji's mother visits her local salon, Minji creates a world of beauty all her own. An ode to the power of children's imagination (and their parents' patience), Minji's Salon reminds readers that creativity and play are worldwide phenomena. (from inside book jacket.)
Posted by Kristin No comments:

Pick of the Week: Sometimes You Get What You Want 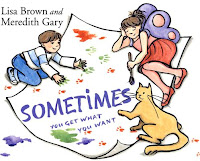 Sometimes You Get What You Want by Lisa Brown and Meridith Gary (Harper Collins, 2008)

This is a sweet, gentle book that is perfect for those moments when things just don't go your way. A preschool-aged girl goes throughout her day finding that sometimes she gets exactly what she wants and other times she doesn't. This book lends an empathetic ear to the common complaint, "it's not fair!" Brown and Gary's treatment of the theme balances life's little disappointments with life's little triumphs as well. A book all young children can relate to!
Posted by Kristin No comments:

Pick of the Week: What Can You Do With a Rebozo? What Can You Do With a Rebozo? by Carmen Tafolla, illustrated by Amy Cordova (Tricycle Press, 2008)

What can you DO with a rebozo? asks this delightful story about an imaginative young Mexican-American girl by Carmen Tafolla. A rebozo takes on many shapes and forms as it cradles a baby brother, is used for a rollicking game of hide-and-seek, becomes a sash for a pirate at sea, and a bandage to care for a sick puppy. But what does this little girl love to do the most with her rebozo? Dance!
Posted by Kristin No comments: Activities include stories, songs, crafts, games, ice cream and a chance to win a hardcover edition of The Complete Adventures of Curious George. Hope to see you there!

New Book: We Are One We Are One by Ysaye M. Barnwell, illustrated by Brian Pinkney ( Harcourt, Inc., 2008)

Come to a day in the park with Ysaye Barnwell, from Sweet Honey In The Rock, and Caldecott Honor winner Brian Pinkney. Join in the song celebrating our dreams, our imaginings, and our common bonds. This moving tribute to community will go straight to the heart of every family. **book description from inside front cover flap.

Brian Pinkney's illustrations really make this one stand out!
Posted by Kristin No comments:

This familiar children's rhyme is often sung with preschoolers and is the subject of two of my favorite picture books for the very youngest child: Illustrated with quilt patches bursting with color, this rendition of "One, Two, Buckle My Shoe" is a superb addition! Big Fat Hen counts to ten with her friends and all their chicks. An outstanding simple book for toddlers and babies.
Posted by Kristin No comments: