Picture books can often help parents and caregivers with the job of teaching life's lessons to young children. A few titles that library staff and our customers have enjoyed on the topic of honesty include: 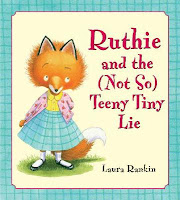 Ruthie and the (Not So) Teeny Tiny Lie by Laura Rankin
Ruthie loves tiny things and when she finds a tiny camera on the playground she is very happy, but after she lies and says the camera belongs to her, nothing seems to go right. 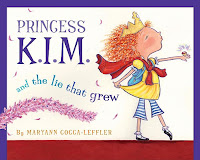 Princess K.I.M. and the Lie that Grew by Maryann Cocca-Leffler
Kim wants the kids at her new school to like her, so she tells a teeny, tiny, bitty lie. She says her name is really K.I.M.for Katherine Isabella Margueriteand that she comes from a royal family! When a classmate invites her to a birthday party, Kim says she cant go because her grandmother is coming to visit. But she had told the kids her grandmother was a queen. Now they all want to meet the queen. Kim is in a real bind; her lie has grown too big and its about ready to explode! 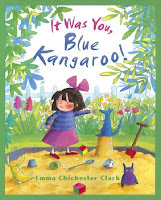 It Was You, Blue Kangaroo! by Emma Chichester Clark
"Blue Kangaroo belongs to Lily, and they do everything together. Almost everything, that is. Recently Lily has been doing some things—some not very nice things—by herself. And blaming Blue Kangaroo! Soon Blue Kangaroo is in big trouble with Lily's mother and is taken away until he learns how to behave. How can Lily get her best friend back? "An engaging cautionary tale about the importance of being truthful."—Kirkus Reviews

Alex Did It! by Udo Weigelt
Three mischievous hares get into trouble and blame it all on an imaginary hare named Alex, until a real hare with that name shows up.
Posted by Kristin No comments:

Pick of the Week: Mama's Kiss 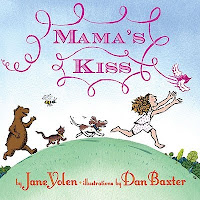 In Mama's Kiss, Mama starts out throwing her daughter a kiss - but - surprise! - it misses her target! Mama throws another kiss, but this one lands on baby brother instead. Thus begins the journey of a traveling kiss that brings happiness to plenty of others before it finally comes full circle back to Mama's girl. This is a very sweet, happy book by the prolific author Jane Yolen. My guess is this one will end up being a favorite bedtime read-aloud for many.
Posted by Kristin No comments:

Fall is just around the corner! We're nearing the start of school, the coming of a new season, the cooling of the weather and the changing of the colors in nature. At the Corvallis-Benton County Public Library, we've just finished putting together our second fall early literacy newsletter! As we enter into our second year of bringing our community our recommendations, ideas, and hints for enriching the early years of childhood, we hope you've found the newsletters beneficial! Please feel free to leave us a blog comment or send an email to: kristin.starnes@ci.corvallis.or.us. Let us know what you think of our current newsletter or what topics you feel we should cover in our future newsletters. Your input can help us improve our services to better meet our community's interests and needs!

View our current fall early literacy newsletter here. You can also view past newsletters on our library's Birth to Six Early Literacy web page.
Posted by Kristin No comments:

Pick of the Week: Dragon Dancing 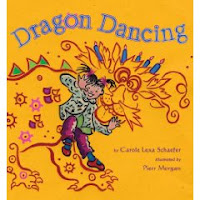 In this story, preschool children listen to their teacher read a book about dragons and then decorate the room for their classmate Mei Lin's birthday. Full of fun, playful language ("snip, twirl, flip....boink-boink eyes...stomp, bomp-tromping....") this vibrant and colorful picture book will appeal to preschoolers at storytime. It's also likely to inspire some artistic fun with sparkly paper, ribbons and crayons. A beautiful and joyful multicultural picture book!

Join us next week on Thursday, August 13th at 10:00 a.m. at the Corvallis-Benton County Public Library for stories, music, and art activities. The program is geared for children ages four-years-old and younger. Babies, toddlers, and preschoolers are welcome with their parents and caregivers. Come ready for creative fun. We'll have painting activities and not-so-messy activities too! Snacks will be provided as well. This is a free event and our final Curious George Reading Program event of the summer.

Hope to see you there!

"Gustafer who?" you might be asking. Gustafer Yellowgold was created in 2005 and has grown to be an internationally-acclaimed music/video sensation. The New York Times has described Gustafer Yellowgold "...a cross between ‘Yellow Submarine’ and Dr. Seuss.” According to Entertainment Weekly Gustafer Yellowgold is “…The most infectious original songs. It’s like tapping into some pleasure center in the brain- both adult and kid…absurdly appealing. Grade: A.” Visit http://www.gustaferyellowgold.com/home/ for more information and previews.

Or check out the following Gustafer Yellowgold DVDs at the Corvallis-Benton County Public Library. Click on an image below to check the library catalog for availability or to place a hold.

Email ThisBlogThis!Share to TwitterShare to FacebookShare to Pinterest
Labels: DVDs 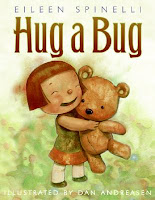 This a celebration of hugs! A hug can turn a frown into a smile and a bad day into a good one. So hug your teddy bear, your teacher, your mom...spread a little joy into your day and someone else's! 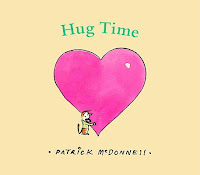 Jules the kitten has a mission - to spread hugs to the entire world! He heads north, south, east, and west bringing friendship and kindness in the form of hugs to a variety of creatures. But what does Jules need? Perhaps a hug himself? This story about the simple pleasures of sharing a hug will appeal to fans of Patrick McDonnell (of Mutts fame) and fans of the power of a hug.
Posted by Kristin No comments: